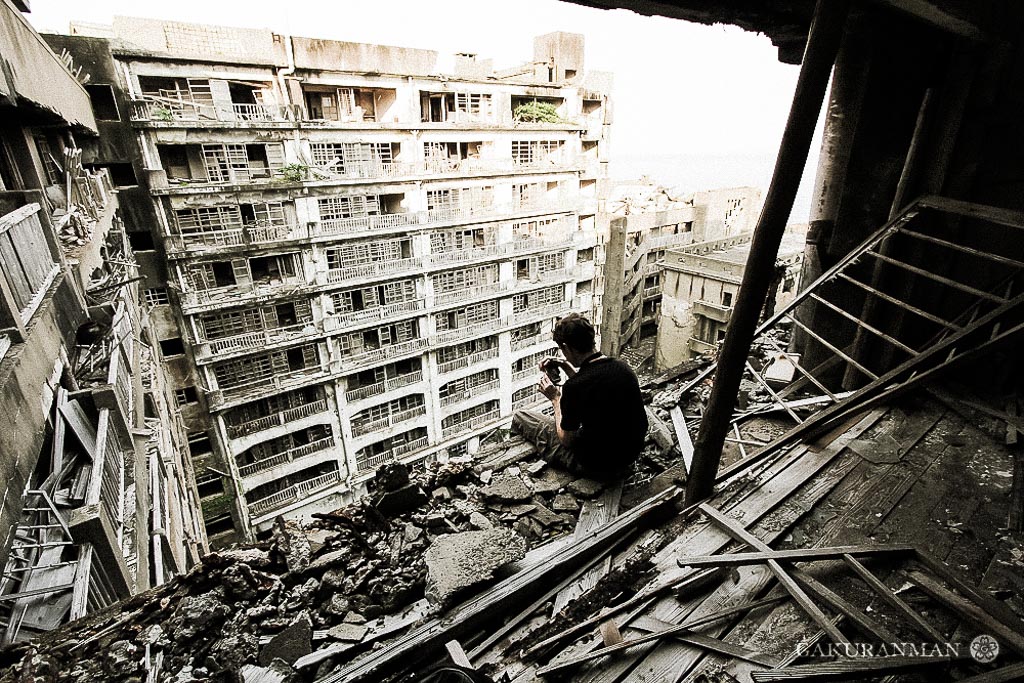 Hashima’s fascinating history makes it one of the most interesting Japanese industrial landmarks.

The first coal mines were established in this island in 1887, even if people living in close islands had collected coal for centuries.

Mitsubishi bought the island in 1890 and established there a big coal mining facility, that played an important role in Japan’s industrialization.

Mitsubishi built on Hashima Island undersea mines and vertical shafts deep up to 199 meters, industrial facilities, dormitories, and a huge concrete wall around the island.

That gave the island the appearance of a battleship riding the waves (hence the nickname Gunkanjima – Battleship Island).

Mitsubishi also built in 1916 Japan’s first large concrete building to accommodate the workers. It was 9 stories high and one of the most advanced concrete buildings in the world at that time.

The mining operations on the island produced a huge amount of coal in the period 1887-1974, but often at the expense of human suffering – especially during World War II, when Korean and Chinese slave labor was employed.

While Japanese youth fought and died onto the battlefields, Hashima started in fact exploiting large numbers of Korean and Chinese prisoners, as many other Japanese factories and mines did.

1,300 of the prisoners died on Hashima by the end of the War, in underground accidents, in suicides, in illnesses related to exhaustion and malnutrition, or trying to escape from the island jumping over the sea wall and swimming to the mainland.

Hashima’s population reched its peak in 1959: 5,259 residents lived on an island so small that you could walk between any two points on the island in less time than it took to finish a cigarette – as one former miner put it.

The 480×160 metre long island at that time reached the highest population density ever recorded in the world (83,500 people/km2).

The island contained all the facilities and services necessary for the subsistence of its community: schools, playgrounds, gymnasium, pinball parlor, movie theater, bars, restaurants, twenty-five different retail shops, hospital, hairdresser, temples and even a brothel.

A weather-proof labyrinth of corridors and staircases connected all the buildings.

Even if overall conditions improved in the 60s, both working and life conditions were not easy on this overpopulated and polluted piece of land in the middle of the sea.

The island remained completely dependent on the outside world for food, clothing and other staples, and even fresh water (until 1957, when pipes along the sea floor connected it to mainland reservoirs), so every storm caused austerity on the island.

Also, the island lacked completely of soil and indigenous vegetation (a movie shot on the island in 1949 was entitled The Greenless Island), and people started cultivating vegetables on soil imported from the mainland only in 1963.

Bacause of the energy shift from coal to petroleum in the 1960s, Hashima’s importance began to decline and its mines were shut down in 1974.

Mitsubishi closed Hashima Island to the public. The last few residents left the island in 1976.

Since then nobody else has ever lived on it.

The abandoned complex of industrial facilities and apartment buildings and the surrounding sea wall, ruined by thyphoons and the passing time, are what remains today.

Hashima is an amazing abandoned place.

Desolate and forgotten, empty and bare (which is why it is also called Ghost Island), this Japan’s ultimate industrial ruins ghost town maintains a deep historical and cultural meaning.

As Brian Burke-Gaffre of the Nagasaki Institute of Applied Science wrote in a recommended reading on Hashima:

“The tight-knit Hashima community was a miniature version of Japanese society and straddled a land mass that, except for the lack of water and greenery, mimicked the entire archipelago. The island’s present forlorn state is a lesson to contemporary Japan about what happens to a country that exhausts its own resources and depends solely on foreign trade (…). The dead island of Hashima delivers a lively warning about the importance of foresight. It offers a view of the end result of “development,” the fate of a community severed from Mother Earth and engaged in a way of life disconnected from its food supply. In short, Hashima is what the world will be like when we finish urbanizing and exploiting it: a ghost planet spinning through space___silent, naked and useless”.

Its historical meaning – and the big scale of its suggestive complex – are perhaps the reasons why Hashima is one of the most popular places among urban explorers.

A number of them have visited the island and described their adventures online.

I’d recommend among the others Gakuranman’s story on his exploration of Hashima, and Jordy Meow’s Gunkanjima Odyssey.

Both of them visited Hashima Island in several occasions.

Recently, Hashima’s property has been transferred to the Nagasaki government and travel to Hashima re-opened to the public.

400,00 tourist have visited the island in 4 years, according to the official website of the non-profit organization “The Way to World Heritage Gunkanjima” which is trying to include Hashima in the list of the UNESCO World Heritage Sites.

However, most of the island remains not accessible to the tourists.

Hashima has also captured the attention of Google, that made possible to visit the Battleship Island through Google Street View.

The island has also been the set of documentaries both on its history (such as “Hashima” filmed by Thomas Nordanstad, a documentary that gives an inside look of the island, through the eyes of a former island resident) and on the most suggestive abandoned places in the world.

It also inspired the lair of the villain of the 2012 James Bond movie Skyfall – even if filming did not take place on the island itself.

Here is an interesting article explaining how the choice of Hashima as the location of the villain in the latest James Bond movie is sign of a twist in the traditional tropes of the series.

As Kelly Chan writes in it, “Hashima is a case study of hyper-development. The island was the site of a fertile coal-mining operation, shaped by capitalist hubris, only to be vanquished by the same force. Its tragic chronicles are spelled out in its architecture (or, more accurately, its ruins), adding a curious new dimension to an old cinematic formula“.