Pyramiden: A Ghost Soviet Mining Town in the Arctic 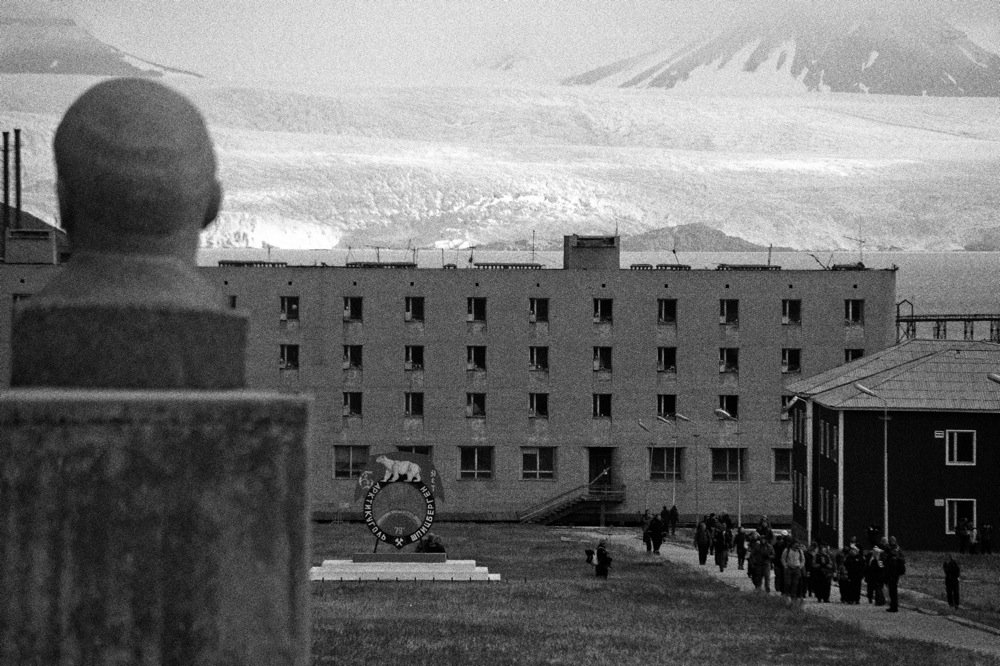 Pyramiden (Piramida) is an abandoned Russian mining town in the High Arctic archipelago of Svalbard, Norway.

This is a desolate place.

Pyramiden is located on the island of Spitsbergen, and its nearest settlements is Svalbard’s capital, Longyearbyen, some 50 kilometres (31 mi) to the south, population 2,040.

Founded in 1910 and sold to the Soviet Union in 1927, Pyramiden has been an active industrial mine and community till 1998, when the state-owned Russian mining company Trust Arkticugol decided to close it.

Pyramiden was abruptly closed and has since remained largely abandoned, but its infrastructure and buildings and interiors are still in place and look almost untouched, mainly thanks to two factors.

The first is its inaccessibility: given its location, and being accessible by a difficult boat or snowmobile journey through the wild only, looters haven’t been able to visit it for a very long period.

The second is its low rate of decay due to the frigid climate of the place.

Pyramiden’s history and remains are fascinating.

At its peak, Pyramiden had a population of 1,100 inhabitants.

Similarly to several industrial communities around the globe, such as Hashima Island, in Japan, Pyramiden was a microcosmos.

People worked and lived there, isolated from the rest of the world.

But unlike Hashima, Pyramiden was an almost independent and self-reliant entity, as described in the book Persistent Memories: Pyramiden – a Soviet Mining Town in the High Arctic published in 2010.

While most of the goods had to be shipped to Pyramiden by boat during the summer, starting from October the fjord was blocked by ice and Pyramiden had to survive on its own.

A power plant produced enough power to keep lights and heating in the community, and animal husbandry and growing vegetables were possible.

Pyramiden also had something special: it was set as a model communist society, an outpost of the Soviets in the “Capitalist Abroad”.

While the workers mined coal underground in difficult conditions and lived surrounded by an extremely hostile environment during the short summers and long winters, they were compensated by relatively luxurious living conditions.

The immigrant Russian and Ukraine miners and their families lived in fact in a Soviet parallel society far from the brutal reality of their homeland.

They had access to luxuries rare to find in their homeland, such as a communal cinema (showing a movie every night at 7 pm), indoor swimming pool with even a basin for the kids, theater and music hall, library with 50,000 books, a sports center with basketball courts, and music studios.

Most food supplies reared in the town. The economy was non-monetary and food was free.

But Pyramiden was not sustainable. Increasingly alienated from its natural surroundings, and designed by Soviet architectural principles rather than the practical demands of its location, Pyramiden – simply – couldn’t survive the collapse of Communism and the fall of USSR in ’91.

In 1998, its residents were given a few hours notice and left in a hurry. All the industrial machines, transformers and electrical gear, roof arches, cables and pipes, roads and rails, but also personal and community items such as books, clothes, toys, glasses and bottles in the bar, sports gear, musical instruments were left and still are in Pyramiden: undisturbed objects that today stand both as physical memories and symbolical memento.

A few workers came back in the summers after 1998, apparently to ship out the salvageable stuff from the mine. Or perhaps to maintain a kind of formal Russian presence in this Norway’s territory whose natural resources can be exploited by all the signatory countries of the 1920 Svalbard Treaty.

Today, this Arctic ghost town is getting ready to a new challenge: to become a tourism destination.

Following the raising interest in the place, Arktikugol has been renovating the hotel and upgrading the infrastructure since 2007, in order to accommodate tourists in the old settlement.

A few workers have been hired to maintain the facilities and guide the tourists. The Hotel Tulip has been reopened on the 1st March 2013, after a 15 years closure. It is now possible to stay overnight in Pyramiden, and visitors are coming to Pyramiden.

While this development is positive for the local economy and for the discovery and sharing of Pyramiden’s cultural heritage, at the same time it represents an obvious fracture with Pyramiden’s past and a risk for Pyramiden itself.

As Elin Andreassen and Hein B. Bjerck write in a recommended reading on Pyramiden, “paradoxes are mounting. Visitors arrive many times a week to explore the abandoned town, only to experience that a town full of visitors is not as abandoned as they expected. In the wake of all the visitors is the need for facilities and services; new installations and infrastructure that are also in conflict with their visions of a ghost town. The Trust Arcticugol staff does their best to maintain the town (…). Unfortunately, in the process all too many of the delicate and touching details we encountered in 2006 were torn down, displaced or destroyed. It is understandable, the urge to clean and tidy when visitors are expected. Unfortunately, the untidy chaos of things also harbors the intimate and delicate objects and constellations that are valuable encounters with the former citizens, with the living town. Making the settlement presentable, paradoxically, also means to insert a barrier between now and then, between the spectator and the attraction, a veil that blur the authentic integration of humans and things (…). Visitors to ghost towns are their own worst enemies, and their caretakers not far from it.”

If you want to see more of this amazing place, Pyramiden has been the focus in a few documentaries including Modern Ruins – Piramida, a 2011 documentary produced by Gebruederbeetz, and the episode 17 of the History Channel programme “Life After People“, and has been inspiring artists such as the Danish band Efterklang and the Norwegian alt-pop duo Frost.