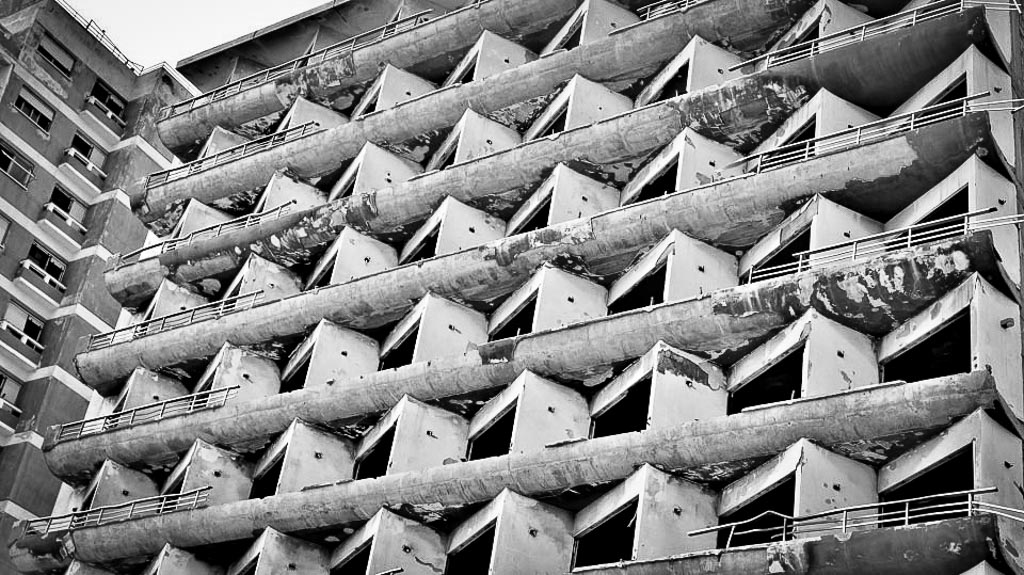 Varosha is a resort in the city of Famagusta, Cyprus, fled by its inhabitants in 1974, when the Turkish military invaded the island.

In the early 1970’s Varosha was number one destination in Cyprus, and one of the Mediterranean’s most glamorous and popular tourist destinations.

It was a Greek-Cypriot community, and a famous tourist resort in Famagusta, the city on the eastern seaboard of the small island of Cyprus, located beneath Turkey in the Mediterranean Sea.

Varosha’s blue waters and crescent white sand beach lured 10,000 tourists at a time, from all over the world.

Its population eventually grew to about 39,000, but by the end of 1974 the town would be conquered by Turkish troops, fenced off completely, and be left with a population of zero.

The Invasion of Cyprus

Greece and Turkey have been fighting for centuries over the island of Cyprus, and both Greek and Turkish Cypriots eventually managed to coexist on the island.

Cyprus fell under British administration in 1878, and was finally granted independence in 1960.

The situation escalated in July 1974.

A military coup d’état by Greece’s ruling military junta, aimed at annexing the island to Greece, led to the replacement of the democratically elected Cypriot government with a puppet regime ruled by a dictator and the establishment of the “Hellenic Republic of Cyprus”.

This, and the previous years of inter-ethnic violence, which had been constantly increasing since 1960, led to the Turkish reaction.

During this invasion, the residents in the predominantly Greek Varosha quarter of Famagusta, fearing being slaughtered by the advancing tanks, fled the city in a very short time, leaving all possessions behind.

Sections of Varosha were also bombed by the Turkish air force, destroying many buildings.

Once the Turks had gained control of the area they fenced it off, and have since refused admittance to visitors and its former residents.

The Turkish declared the Turkish Republic of Northern Cyprus comprising the northeastern portion of Cyprus.

After 40 years, Cyprus is still divided in 2 sections: the Republic of Cyprus, internationally recognised, and the Turkish Republic of Northern Cyprus, recognised only by Turkey.

The large Turkish army maintained in the Turkish Republic of Northern Cyprus is internationally regarded as an occupation force.

A demilitarized area (the Green line), that runs for more than 180 kilometers, and is wide between a few meters to 7 kilometers, divides the island, and is patrolled by the United Nations Peacekeeping Force.

And after more than 40 years, entry to Varosha is still forbidden to the public.

Fenced off in barbed wire, guarded by Turkish soldiers, who whistle sharply at tourists daring to flaunt the signs that ban anyone from aiming even a camera into the ghost city.

Dozens of waterfront hotels are empty and rotting, with broken windows exposing fully-furnished rooms to the elements.

Homes have closets full of clothes, cabinets full of dishes, rooms full of daily life objects, even if all of the houses have been looted by the Turkish troops over the years.

Cars rot in garages and on the road. A car dealership sell “brand new” 1974 model-year cars.

Several construction cranes tower above the skyline, frozen in time.

A few contractors are the only authorized civies allowed to come in, to do occasional maintenance work on some of the buildings that are in use by the Turkish army.

As Alan Weissmans points out in his book The world without us, Varosha’s infrastructure is now damaged beyond repair.

The entire city is beyond repair. Forty years of unmaintained exposure to the elements impacted deeply on its structures.

Nearly all of Varosha’s buildings are unsafe and have major structural damage, roads are cracked, water pipes collapsed, the sewage system is destroyed, the power grid is antiquated.

The city would need to be completely torn down and rebuilt.

Varosha is an off-limit ghost town now, and completely inhabitable.

The Future Of Varosha

There are signs of openings on both the sides of the conflict.

The abandoned airport in Nicosia hosted in 2014 a meeting between the leaders of the Greek Cypriot and Turkish Cypriot communities.

The peace talks have been suspended again in October 2014, but the recent election, in April 2015, of Mustafa Akinci as leader of the Turkish Cypriot-controlled northern part of Cyprus raises the hopes, as the Financial Times highlights.

Mr. Akinci who, as mayor of the Turkish side of Nicosia, worked in the last 14 years on projects of practical co-operation with his Greek Cypriot opposite number, has aired the idea of returning Varosha to the internationally recognised government of Cyprus, which is under Greek Cypriot control.

The United States too have been making pressure at political level to stabilize a region critical to U.S. and European interests, both for geopolitical and energetical reasons.

Turkey would like to join the European Union, but its occupation of Cyprus is seen as a roadblock, and many on the Turkish side too push towards a peaceful resolution of the situation that have been negatively impacting on the overall island’s image and economy for forty years.

The resolution of the Cyprus’s situation could lead to the reopening and rebuilding of Varosha.

At the same time, Famagusta Ecocity Project, a project to rebuild Varosha as a model for green technologies, is getting more popular.

In the worlds of Vasia Markides, founder of the project, during an interview with the BBC, “To really take a place that is a symbol of war and neglect and hatred and abandonment, and turn it into a model that the rest of the world could use – to me it’s a success story even if we only bring awareness, a plan for other communities.”